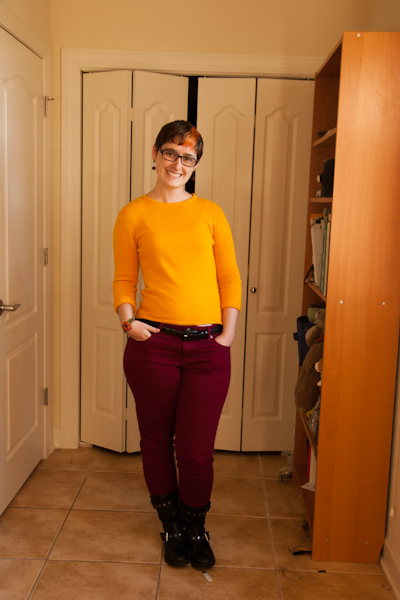 There’s a Mia in my bedroom! She arrived yesterday and we IMMEDIATELY went to a clothes swap (like, I picked her up from the airport and drove straight to it). In retrospect, considering how hungry and tired we both were, maybe not the best idea, but it was still fun. 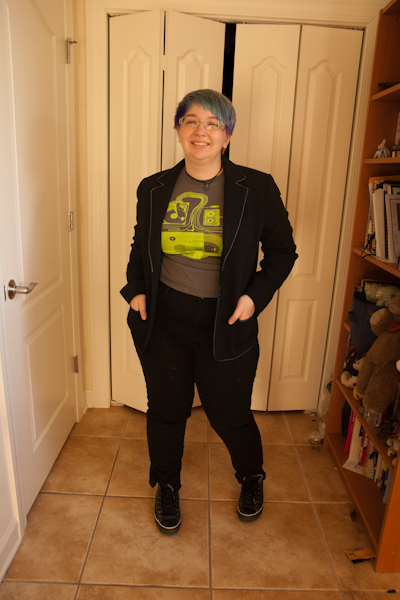 I, of course, needed to integrate one of my swap grabs right off the back. This blazer was one of my “finds”, and by finds, I mean blazers that my friend Abby brought mostly because she reads the blog and has heard me grumble about my blazer lust for a bit too long. So, YAY ABBY for not needing blazers! 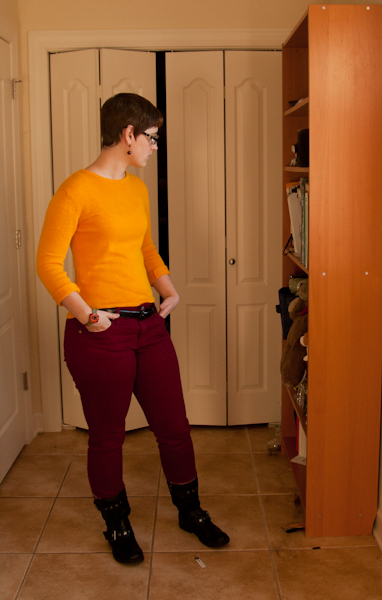 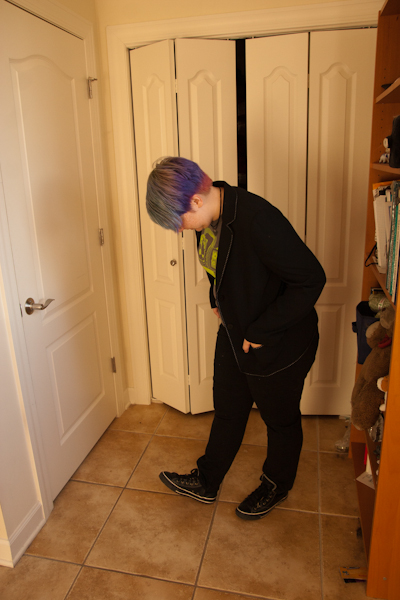 I honestly don’t think we’re gonna make it up too late today either! We got up a bit early (but after 10 full hours of sleep) to go to the flea market near my school. We had some really delicious Mexican food…the best I’ve had since moving from California. We got 4 delicious gorditas and two horchatas for $16 and ended up wonderfully full.

From there we went to a secret I had lined up for Mia…massages. One of my friends was offering a special deal to help get herself a bit of extra cash on the side and I thought it would be a nice way to welcome Mia back to Chicago. 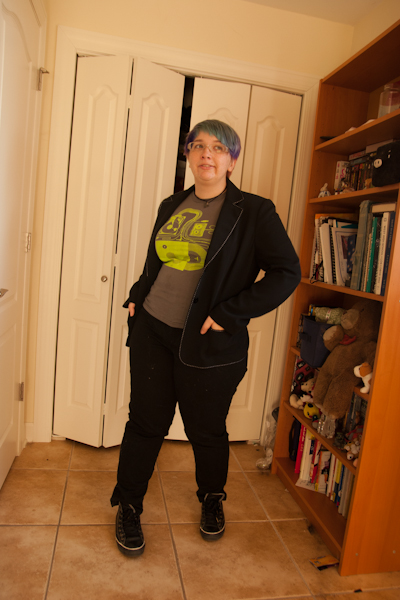 I blame said massage for my own current sleepiness. Every massage I’ve ever had (2) has taken so much out of me. I’m going to hypothesize this has something to do with the fact that I use the crap out of my body and I go too long between getting fixed again that whenever I do get fixed, my body is a little…stunned.

Mia and I decided to include this image because she had tossed items in her suitcase just assuming that the item lengths would be compatible. So…here is your visual moral of the post: check that your clothes will work together. 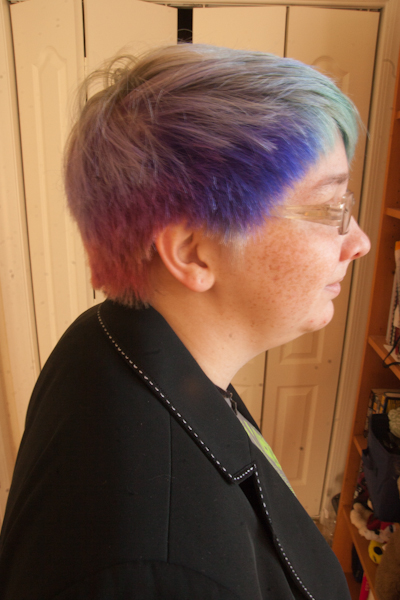 Anyway! I’m going to guess that we’ll be pretty actively posting while Mia is here, because I’m excited to show off my new finds. 🙂

(Note from Mia: I’m excited too! I got some pretty sweet tidbits at that swap, exhaustion and all. Also, for the record, Saturday night I totally had a dream where Gracey was having a birthday party at the townhouse in Santa Cruz where I lived senior year of college, and we were all playing video games. Jaunty Dame was there and was wearing a fabulous vintage hat–and was super charming, as was Gracey. Travel and sleep deprivation do weird things to my brain, but I’m willing to believe that part of the dream was accurate!)

I know I haven’t been around much; it’s been hard for me to get pictures as soon as the weather has gotten colder. I need to get my camera and my flash set up in the apartment. In the mean time, I want to share some images of someone who is inspiring the shit out of my fashion lately.

De’Borah Garner from Season 3 on the Voice. I mean, how is she so awesome? The almost head to toe red with just the touch of bright blue accents? It’s so bold and unique.

She rocks menswear with just a touch of femme. I love her lime watch here…along with trying to be more subtle about checking the time than looking at a phone, she’s the major reason I’ve been thinking about picking up a watch. 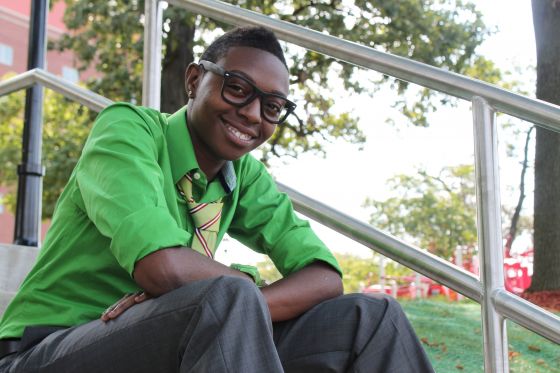 I mean how so cool? I’m getting all revved up for thrifting with Mia when she gets here on SATURDAY. 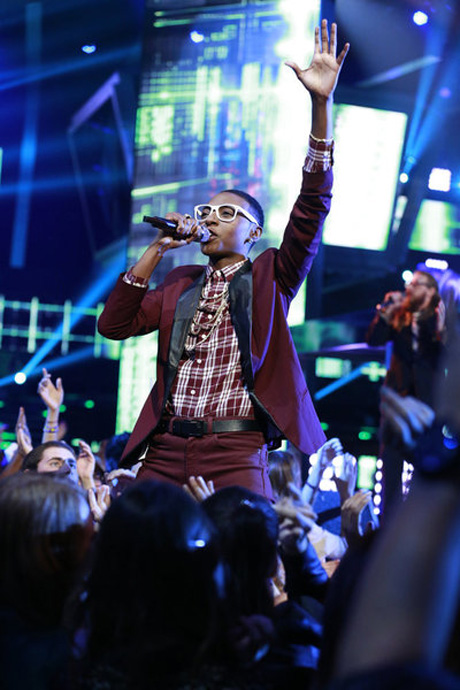 I…am also starting to think it’s time to get new frames. >_> I suppose I should probably get my eyes checked first and make sure that I have the right prescription first, but then I’m going to order like half a dozen pairs of frames.

Today, I’d like to remind our American readers to get out to the polls and vote! It took me all of 20 minutes this morning before class. Hopefully, your lines will be short too, but even if they’re not, take solace in that your opinion is being heard. Read up on local measures (Chicago had 3 on the ballot and Illinois has one that was about limiting campaign donations from corporations!) because those matter too! 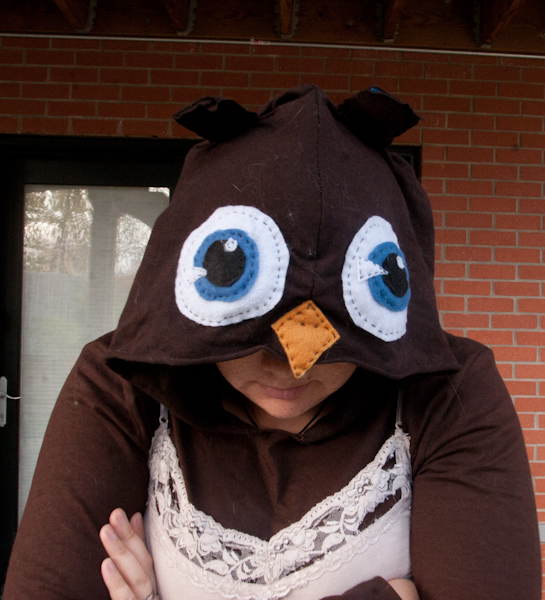 Did I scare you? No? Ok. Well maybe owls aren’t really the scariest Halloween creature. But hey, at least I have a costume this year, and one that can easily be worn to school. I made it all by myself!  The hood is made from another t-shirt, and all of the embellishments are felt. I also made Braden a dino hoodie, but I don’t have a good picture of that yet.

My favorite part is just how weird the hood looks upside down. Basically I become that owl who has flipped its head!

Are you dressing up for Halloween? If not this year, what was your favorite costume as a child?

I hope you’re all safe. Braden and I got back to Chicago before Hurricane Sandy shut down flights from Florida, thank goodness. I haven’t had too much of a chance to do outfit pictures though, so instead, some reading recommendations!

This map tells you why it was so hard for me to get to work this morning – southbound winds of around 25mph while I was heading northbound. This map is from here, and it uses national weather data to graph wind patterns. This is a really neat show of the sort of work we’re doing in my Informational Aesthetics class, even if no one from my class did it. XD

This article about how the author came to understand the lie of the Pro-Life Movement blew me away this morning. It reminded me of the humanity of believers, but also of how hard the Movement has been working against its own stated goals. The notion that Obamacare, by providing free contraception, is going to reduce abortions in America by 75% was both shocking and understandable.

On the flip side, this article about the personal decision of the author to abort a child that would have lived a life of incredible pain out of love for that child reminds us that not all aborted children are unwanted. Some are deeply desired and cared for, and that empathy for a fetus does not always mean bearing that fetus to term.

Honestly, both of those articles are so heavy, I think two reading recommendations are enough for today. 🙂

Guys. THIS. OUTFIT. Do not ask me why I love it so much, but I do. Maybe it’s the awesome skirt from Gracey that matches my shoes perfectly? 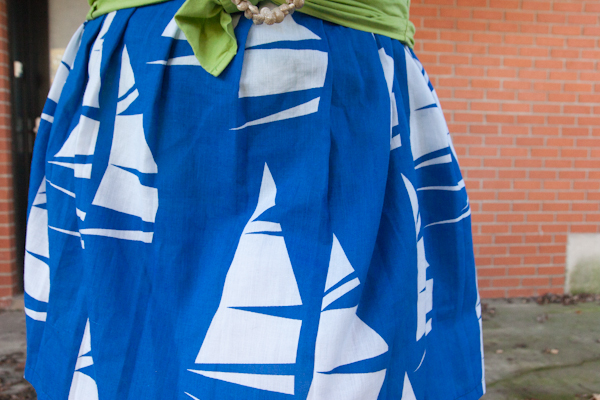 SAILBOATS. It’s such an adorable pattern. The length is a bit touchy: I had to wear my shorter-under-skirt-shorts rather than my preferred ones, but I’m digging it. I’ll have to try wearing it with tights when it gets a bit cooler again for sure.

I also want to point out that a year ago, putting together a pattern with a bright that wasn’t in that pattern would’ve weirded me out. And a skirt with tennies. But this outfit is helping me feel like I am werkin’ it, so thank goodness for personal fashion blogging y’all.

I feel like I’m forgetting to mention something. Something…important. 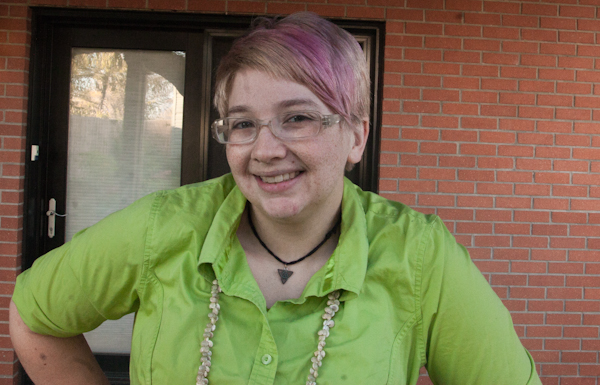 Oh right. I got a haircut. 😉 I have not yet figured out how I feel about it. It’s out of my face, which was the big motivation for finally going in, but I had sort of hoped for something even more asymmetrical. But it’ll grow on me (Hahahaha, get it? Cause it is. Growing on me. Literally.)

Yesterday it was definitely t-shirt weather, after a few weeks of absolutely needing at least a hoodie, if not a proper coat. I wanted to wear these teals tights, because yay, tights! From the tights, I decided I wanted to wear this shirt, since the teals match pretty close. I always struggle with this shirt…it’s just a touch too loose for my personal taste, but belting it disrupts the pattern that made me take it home.

So I tried a partial tuck. I’m not sure I loved it, but it helped me feel more put together in any case.

I’m going out of town this weekend for a wedding so I will yet again fail to build up a backlog. Do y’all operate off of backlogs of images (like Mia!) or are you putting your posts up almost the same day you take the pictures(like my sorry butt)?

Reading in Skirts
Create a free website or blog at WordPress.com.