So! This week turned out to be a rough one for me, mental-health-wise. Things are looking up, though, and I hope the same can be said for you.

Regarding the Charleston mass murder, if you want to do something and aren’t sure where to start:

1.) You can consider a couple of ways to donate to help the families of the murdered and their communities in South Carolina directly on the Charleston government website. I know lots of folks don’t have money to spare, and I don’t want you to feel guilty if you’re one of them. As someone who can, I always look for these funds to try and help folks on the ground who are in need.

2.) Check around your city to see if there’s a vigil you can attend. Many took place on Thursday night, but there will be more in the days to come. Even if they’re prayer vigils and you aren’t religious (like me), showing up and listening to what people have to say counts for a whole heck of a lot. I don’t have a comprehensive resource for this, but sourcing one on social media seems like a good bet.

Today is actually Reading in Skirts’ fourth birthday! How about that? Keep an eye out for the traditional celebratory giveaway on Monday. For now, I hope you can go into the weekend empowered and comforted, be it by your community, your plan, or whatever gives you strength. Also, please enjoy these photos of Flat Tire going from deep sleep to wideawakeness in under thirty seconds:

Hey, pals. I’m gonna share some links for helping re: Ferguson and police brutality across the United States. 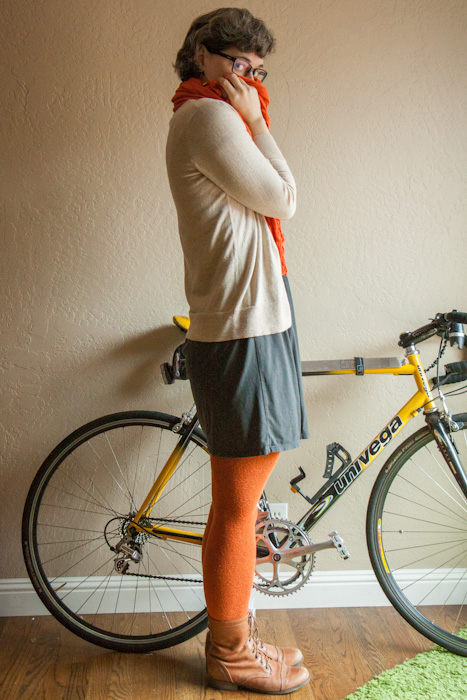 The National Bar Association–an association of predominantly Black lawyers campaigning, among other things, against police brutality. 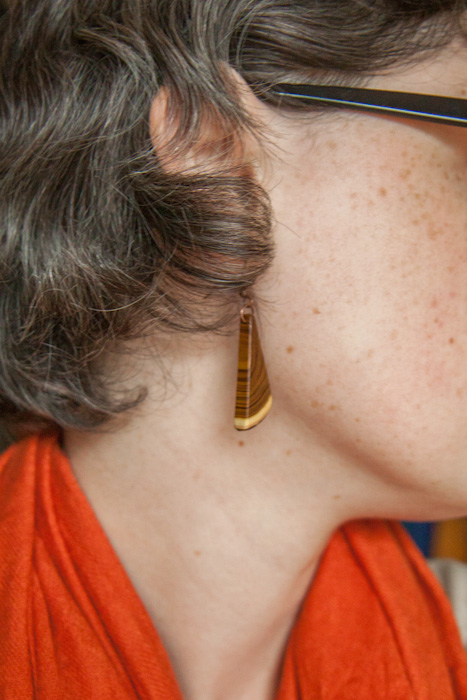 The National Lawyers Guild, which is doing on-the-ground work in Ferguson.

And lastly: look up who represents you in Congress and send them a letter calling for mandatory body cameras on law enforcement officials in your area and nationwide. Do what you can.

What ho, fellow travelers through time and space! I hope you’re well. And speaking of space, today is Ada Lovelace Day once again and I’m here to profile Minal Sampath!

image via Skies of Couple-Colour

Here’s what you need to know about Minal Sampath:

– She’s a systems engineer in India.

– You know, the one you might be familiar with from this photo of amazing Indian scientist women hugging each other after they successfully landed their orbiter, making India the fourth country in the world to do so.

– She was inspired to become a scientist when she saw a live launch on TV as a kid, so she worked to make it happen like a boss.

– She and her team built three instruments for the orbiter, including an infrared camera and a methane detector.

– In an interview with BBC, she stated that she wants to help improve the ratio of working woman scientists in India: “I want women to imagine that they can do this.” I can only imagine how many young girls she’s motivating with her visibility, just as she was motivated in her childhood.

– She’s also said that she wants to be the first female space-center director in India, and that someday she’d like to go up into space herself.

Keep an eye on her, friends. She’s going to be running ISRO before too long.

If you’d like to know more about some of the women who worked on the Indian Mars mission, this Firstpost article by Sandip Roy is a great place to start. You can also peruse this year’s ALD spreadsheet to see other great women who are being profiled in Ada Lovelace’s honor. Finally, if you want even more reading material, go through The Toast’s Gal Science archives to read interesting, funny, smart pieces written by lots of woman scientists themselves. Astrophysicists! Biologists! Volcanologists! It’s heady stuff, I tell you.

Why not celebrate a woman scientist today?

I know, I know, stores have been decorated for it for months now, but Ada Lovelace Day is finally upon us once more! In honor of Tia, who is busy being a computer scientist but who is still presumably wearing clothes sometimes, and in honor of STEM women everywhere, celebrate a woman scientist today! This year I have chosen to profile Lynn Conway:

Here’s the scoop on Lynn Conway:

– She’s a pioneer whose innovations in the 60’s and 70’s with IBM and Xerox have impacted chip design worldwide.

– After she was fired from IBM for her status as a trans woman, she rebuilt her career and achieved international fame for her VLSI advancements, like a stone-cold badass.

– After being involuntarily outed as trans in the late 90’s, she stepped up and became a trans activist, and talks openly about her experiences and the stigma that affected her career.

– In 2013 she was invited by President Obama to the White House LGBT Pride Month Reception! Way to be visible, Lynn!

If you’d like to read more about Lynn, check out her homepage, which is chock-full of information (in very tiny font!). I also encourage you to check out this year’s ALD map to see more stories about STEM women and the rad things they do.

Yes, happy Ada Lovelace Day, everybody! In case you just wandered in, today is a very good day to, to quote the site, “celebrate the achievements of women in science, technology, engineering, and maths.” (Or math, if you’re not British. Do other non-British English speakers say maths? Australians? Moon people?)

Anyhow, today I am going to profile Dr. Scottie Henderson!

– She’s a woman of color in the sciences, and kicks butt despite the hurdles involved in being a Native American/Latina woman scientist.

– She’s an invertebrate scientist, which means she’s done all kinds of neat things with insects, including studying their resistance to genetically-modified crops.

– She teaches at Cerritos College in Norwalk, CA, where she mentors young women and minorities in the sciences.

– She tells her students that she was named Scottie because her dad was a Star Trek fan (which is rad whether it’s true or a joke).

– She’s presented at at least one summit organized by the National Organization of Gay and Lesbian Scientists and Technical Professionals, Inc. (NOGLSTP).

Plus, look at those sweet shades. Great, right?

If you’d like to read more about Dr. Henderson in her own words, you can read her bio at the SACNAS Biography Project, which is a resource by the Society for Advancement of Chicanos and Native Americans in Science created to profile Chicano/Latino and Native American scientists and increase their visibility. There’s even a specific list for women if you’d like to read about other awesome ladies (which obviously you do).

And, of course, you should definitely go to the stories page on the Ada Lovelace Day website and read about STEM women all over the world. Peace out, and hug a woman scientist today!

Hi all! Happy Ada Lovelace Day! WordPress just dumped my first try at this post, so hopefully I’ll be able to maintain my enthusiasm. *kicks the blog* In any case! I was going to do research and find a new scientist that I didn’t know, but then thought it might be better to focus on someone I do know. I thought about writing about my adviser, but that had the potential to read as a bit of a kiss-up. So instead, I’ll be writing about Doctor Tanya Berger-Wolf, an Assistant Professor at UIC, because she has absolutely no bearing on my ability to get paid or graduate.

Tanya runs the Computational Population Biology Laboratory here, and has done so since 2005. Her work focuses on how algorithms can allow biologists to understand animal phenomena. One of her most well-known works is what is called (around UIC anyway), Facebook for Zebras. The project combines computer vision recognition and network theory to understand the sociality of zebras, by identifying them automatically from camera images and then assessing what natural groups of zebras are occurring. She has given talks about her work at the University of Iowa Computing Conference, the University of Chicago, and even at MIT. Her work has been published 60 times since 1999, which is an impressive track record.

In addition to the impact of her scientific research, Tanya is an incredible mentor. She was (and is again, I think) the faculty mentor of the Women in Computer Science club when I first attended it. Since she joined UIC in 2005, she has graduated 9 Master’s students and 5 PhD students, which is pure madness in the short time for 7 years.

Beyond what she has done for others, Tanya is absolutely one of my role models. She is a dancing academic (salsa!), and she is freaking fierce in the dressing department. Many women in computer science dress in more muted colors so as to not stand out, but Tanya wears lime greens and bright purple jewelry and red blazers and just color all the time. While I would respect and enjoy her company regardless of her fashion sense, I feel like this blog is definitely the place to talk up her sense of fashion. She has definitely become my academic fashion icon.

Alright folks! Have you done anything for Ada Lovelace Day?

Actually, I’m not sure if I’ve written about street harassment here before. I’ve done so in various other places over the course of my life because street harassment has been a fact of my life every summer as an adult. I’m not even going to say that much about what happened this particular time, other than that this was the first time this year because it is 85 in March in Chicago(so no jackets to androgynize my form and make me less vulnerable).

The thing that sucked the most is Braden asked me what happened(because I’d been walking to meet him at a coffee shop), and I found myself saying “the usual stuff” and wincing. There’s something so wrong that there is a “usual” category of what happens when I walk alone. Fuck. that. shit.

No one deserves to be cat-called, made to feel unsafe, hollared at, or sexually propositioned just for walking down the street. It doesn’t matter what they are wearing, how much thigh they show, how much cleavage they have. It’s not a compliment.

If you hear from a ladyfriend that she’s been harassed on the street, don’t suggest to her that she take it as a compliment. That’s callous advice. What she wants to hear from you is that you will call out anyone that dares to treat her that way(Braden asked if I wanted him to you know, *gestures at throat* which made me laugh and feel a bit better). Because nothing a woman does in response to street harassment is a safe reaction: doing nothing can be just as dangerous as thrusting a middle finger in the air(which is my natural impulse to people who are driving past as they harass me).

Erika Moen shared this youTube video yesterday, and I encourage y’all to share it as much as possible. My life would be so much better and my summers so much easier if more men spoke up:

(Hopefully back to outfit posts and happier things soon).

Reading in Skirts
Blog at WordPress.com.