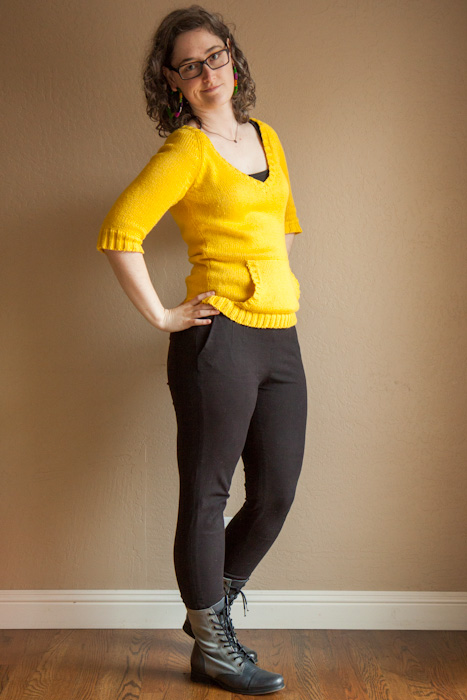 After six months of wandering astray, I return like the prodigal daughter to Gracey’s Literary Stylings! Momentous!

I had a good handful of books to choose from this time around, and after much (okay, some) deliberation, I went with Nalo Hopkinson’s Midnight Robber. It’s a hard book to summarize, but basically: girl, Tan-Tan, grows up on a Caribbean-colonized planet as the daughter of a mayor; mayor commits a felony and escapes with Tan-Tan to a parallel dimension used as a prison world by the main planet; Tan-Tan grows up among hardened criminals; and things progress from there.

It’s a really excellent novel–possibly one of the best I read in 2015, actually. Hopkinson creates two rich, vivid worlds in Toussaint and New Half-Way Tree, and a complicated young protagonist in Tan-Tan. The book is written in patwah and has a gorgeous rhythm and poetry to it, and many pieces of the story–including the relationship between colonizing humans and colonized alien species–are done with what feels like a great deal of thought and care. I would like to give a strong content warning about the sexual abuse of children; it’s a deeply-entwined part of the story, and I wouldn’t recommend you pick it up if that’s going to affect you adversely.

It’s hard to do the book justice with one outfit, especially when it’s winter and that outfit doesn’t feature any feathered crowns from the Miss Universe pageant, but I did my best. The boots and pants are meant to represent Tan-Tan’s survivalist teenagehood, since I couldn’t really wear a dhoti to work in January; the sweater is at least close to saffron yellow, Tan-Tan’s favorite childhood color; the earrings are a nod to the Afrofuturism of the novel (although I’d like to acknowledge that wax print is not as strong in Caribbean culture as, say, madras); and the wee skull necklace is for the Midnight Robber persona that pops up repeatedly around the book’s Carnival scenes and which Tan-Tan eventually adopts as her own.

Ultimately, Midnight Robber is an intense book that I very much recommend if you feel up to the things I mentioned above; Tan-Tan doesn’t have an easy life, and her suffering is not shied away from. I think there’s a lot of reward if you can forge on through, though. Now go check out Gracey’s Literary Stylings post, and those of the other folks who’ve linked up!

It’s not restrictive so I could conceivably escape peril while wearing it, but it also goes nicely with argyle!

Even action clothing has its limits, though, so please enjoy a few examples of why I don’t try to do jumping (or in this case, high-kicking) pictures for the blog anymore.

It’s dignity! Gah! Don’t you even know dignity when you see it?!

Guess who overslept on her first day back to work in the new year?! I completely spaced on resetting my alarm after the holidays like a champ. Fortunately, my boss was very understanding, and I’m also glad that I remembered all the appropriate pieces of clothing while rushing to get dressed. Any potentially positive aspects of this outfit just frosting. 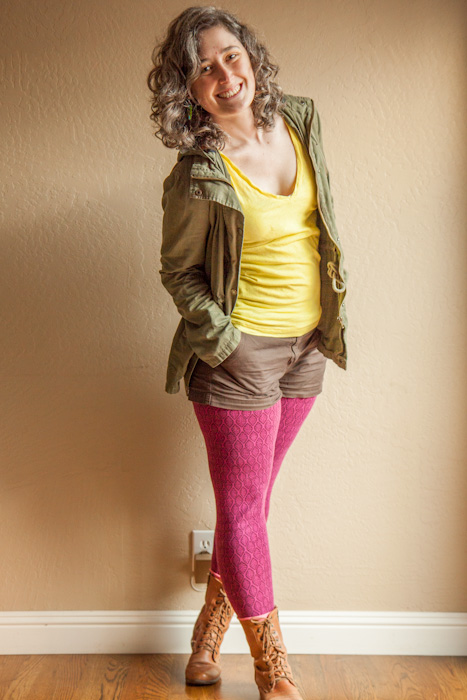 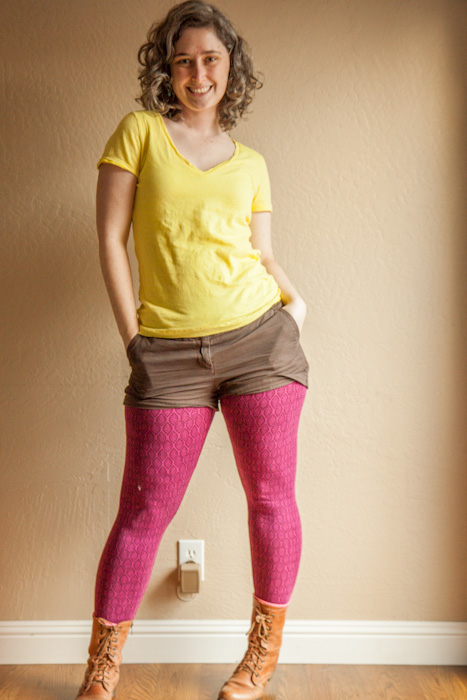 How’s the year been treating you so far? I’m not a huge resolution-maker, but I have resolved to choose relaxation over anxiety or irritability when I can help it.

(I mean, I frequently can’t help it, but that’s what the medication is for.)

Possibly I should also resolve to stop losing my glasses in the couch, but let’s take things one step at a time here. 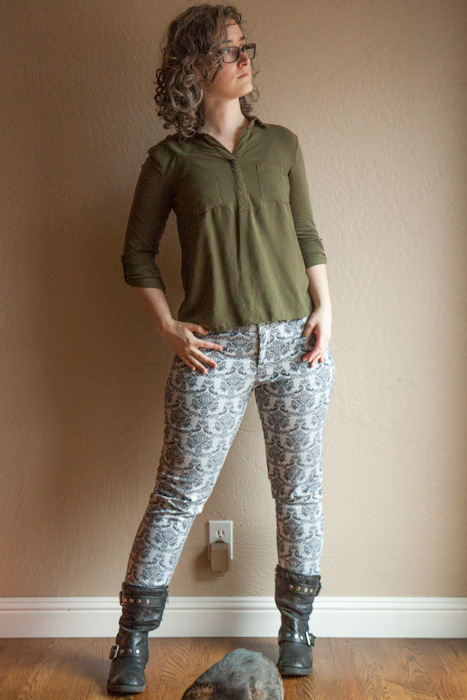 This getup worked pretty well so long as I didn’t lift my arms above my head.

I knew the lengths might be a bit buggy but I tried it anyway, just to see. End result: it distracted me throughout the day exactly as much as I expected it would!

I’m still not comfortable with crop-tops, and I don’t know if I ever will be, but maybe a deliberately short length would feel more intentional than regular shirts on a slightly-too-long torso? 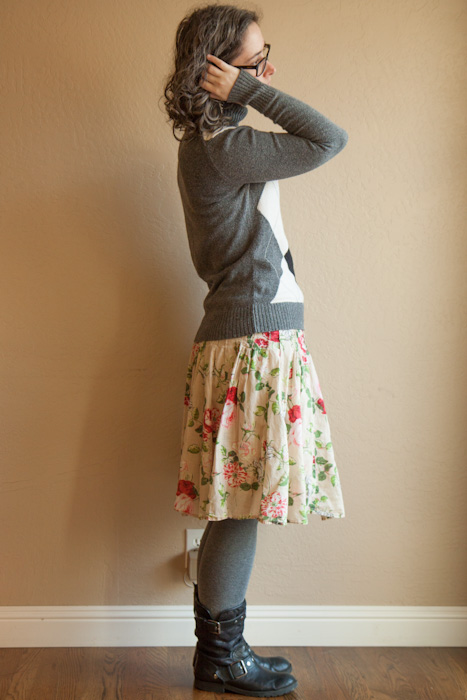 See, now this outfit I at least partially planned out the night before. Good thing, too, because I overslept my alarm and missed my chance to work a shower into my already-rushed morning schedule.

That always happens this time of year, but I haven’t figured out a solid way around it yet. I’ve started placing my phone across the room so that I have to physically get up and turn the alarm off, but that doesn’t work very well when it’s so cold that I immediately turn back around and crawl under the covers again. 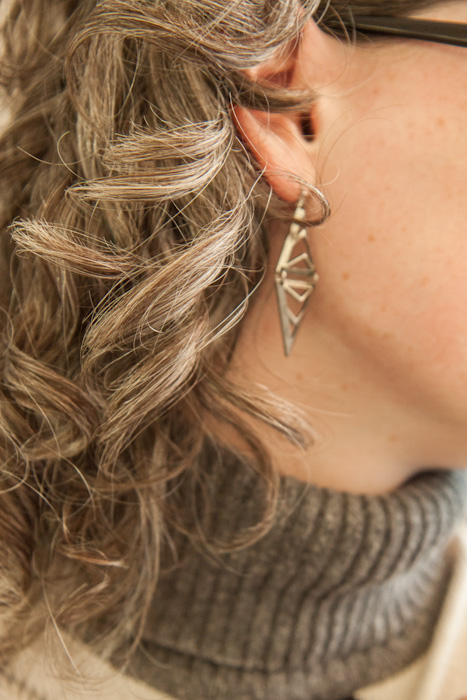 I’ve also tried placing my fuzzy winter robe and slippers strategically near the alarm, but I’m not at my most rational when I’m sleepy. Let’s hope that setting the thermostat a few degrees higher in the morning makes a difference or it’s going to be a greasy winter. 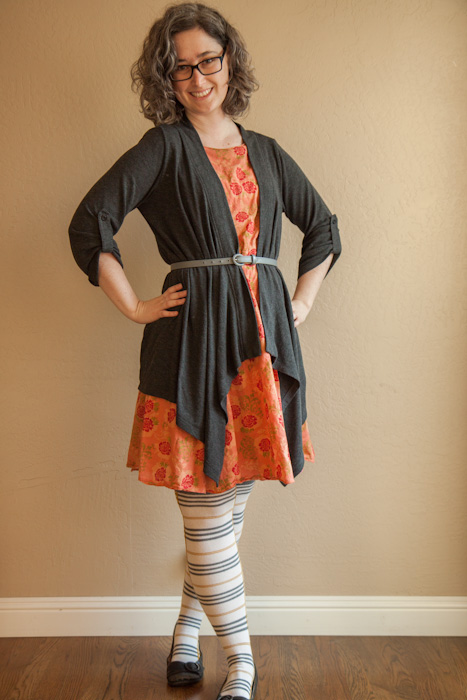 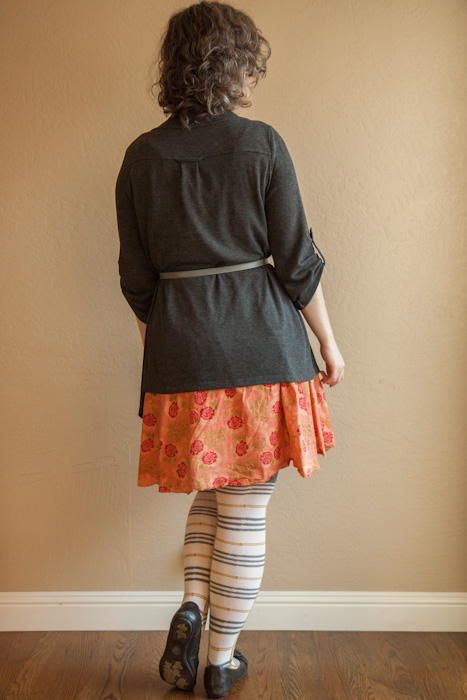 When I put this outfit together I wasn’t sure about it, so I asked Mike if I looked weird. 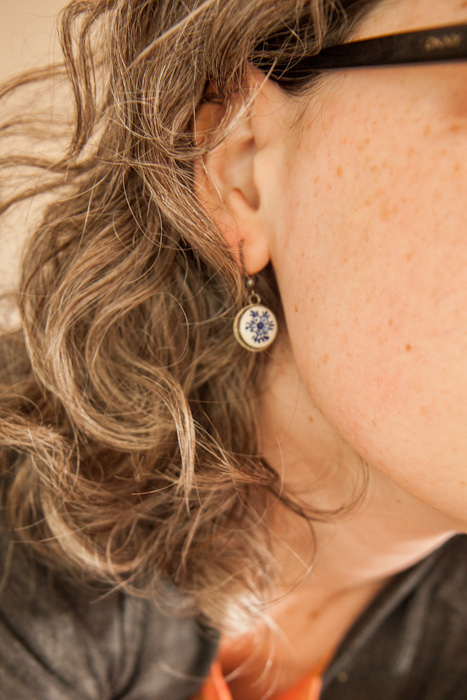 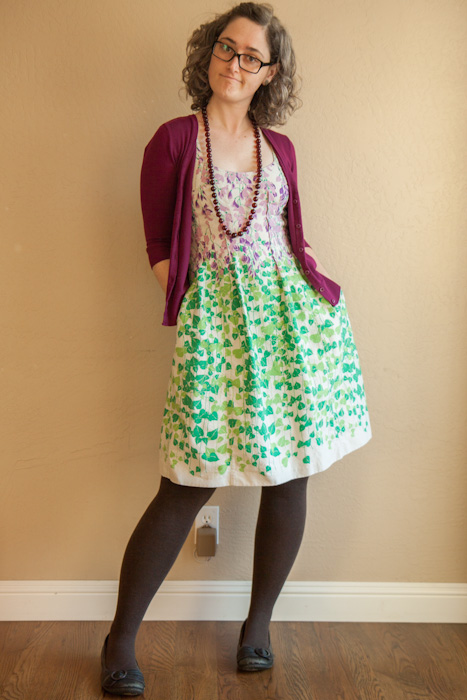 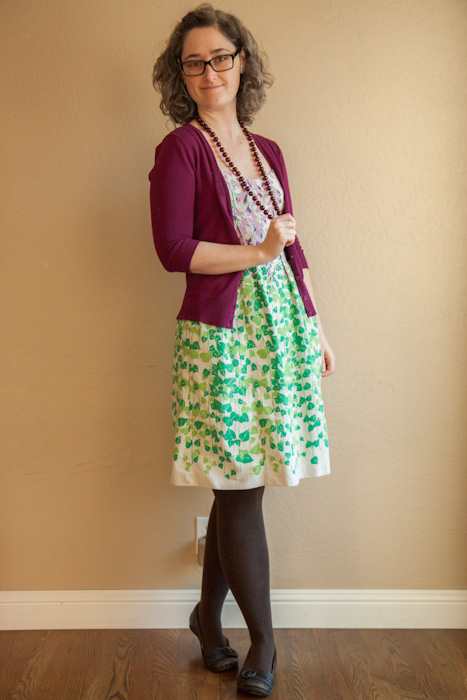 I know this might knock your socks off, but this necklace? Used to be two necklaces.

I know, I’ll let you catch your collective breath. I don’t know if I can even delve far back enough into this blog’s past to find one of the original shorter incarnations, because one of the problems with them being shorter was I just didn’t wear them much. Same problem as the Tom Waits necklace, which I lengthened a while back by adding some chain to it.

I guess longer necklaces are just my deal? I dunno, man. Anyway, I just made a few modifications to the two vintage amber necklaces my mom gave me so that I could fix them together, and here we are! Truly mind-blowing work, I know. I’m impressed with myself too. 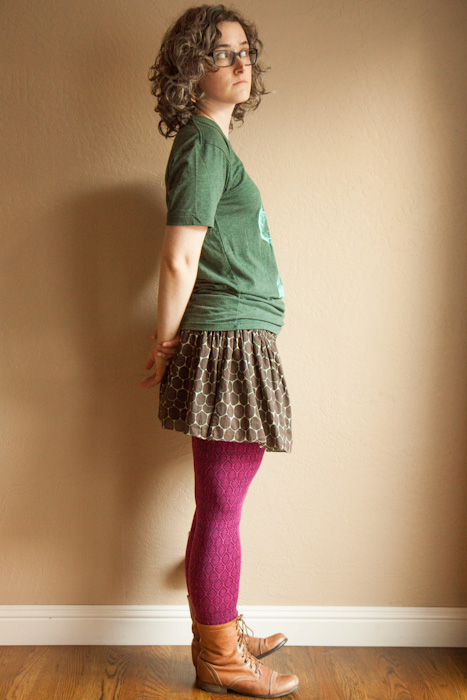 This outfit is something I puzzled together to go see Vienna Teng again! 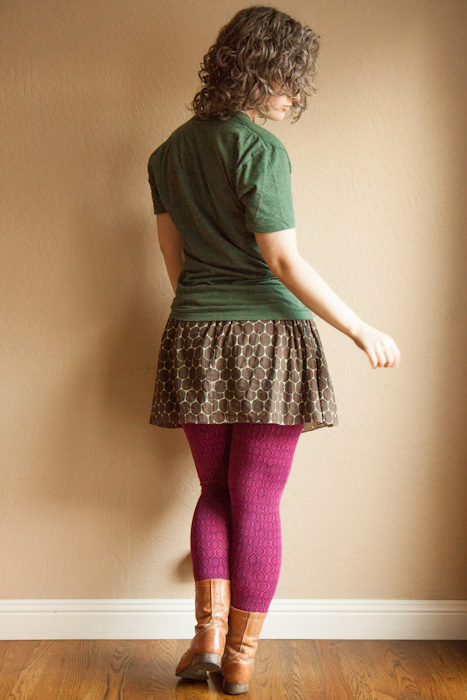 I have a penchant for seeing her in November, I guess.

This time it wasn’t just Vienna, but also most of the rest of the cast of The Fourth Messenger, a musical about a modern-day female Buddha. They performed a selection of the songs and then did a signing for the album release party! Neat!

I’ll be honest–I just don’t know if I’m a big fan of musicals anymore. There were definitely a lot of good parts to The Fourth Messenger, though, and I’d recommend it if musicals are your thing. The performers were all excellent, particularly Cailan Rose and Reggie D. White. Vienna did some solo music after The Fourth Messenger, too, and that was delightful as always. A good outing to inaugurate my new leggings, indeed! 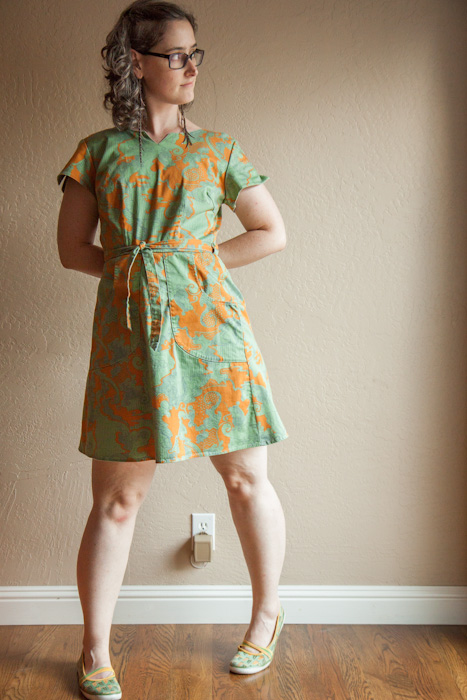 I think I have more photos here than there are pieces to this outfit. 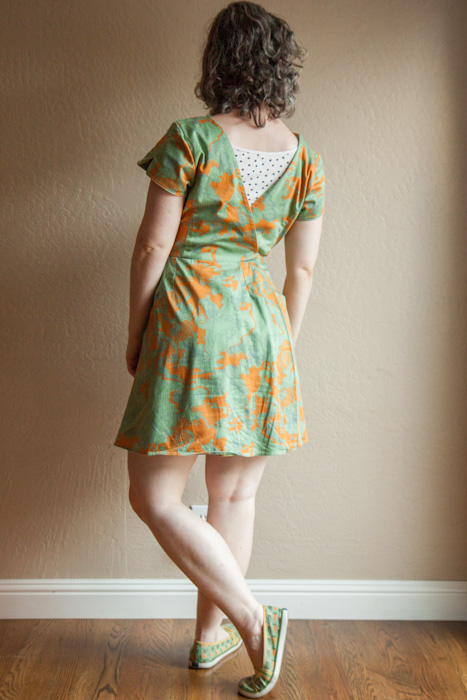 Mmyep, six is definitely bigger than four. I took AP Calculus in high school, can you tell?

You know, I wanted to continue studying calculus independently in college, but man, those textbooks were expensive. As a result, I haven’t Done a Math in probably ten years! I mean, I do math (poorly), but I haven’t sat down to think about fun math in a long, long time.

One thing I really miss is my graphing calculator. Shout-out to Texas Instruments! And shout-out to whoever figured out how to put games on there. 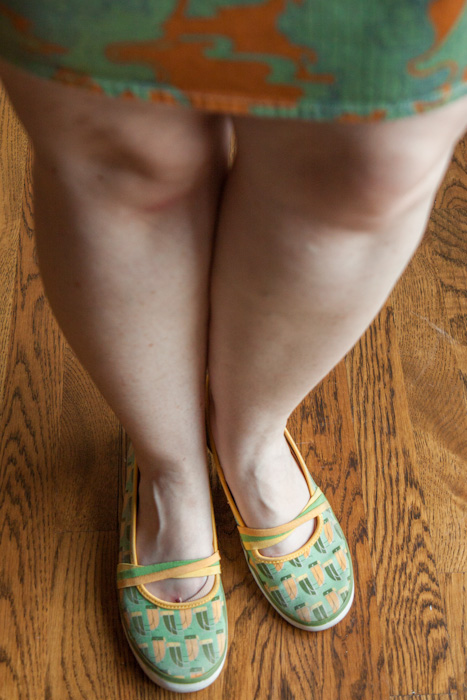 Block Dude was vital to my life senior year.